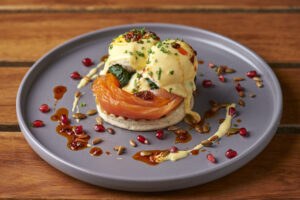 This year we’re publishing a series of online recipes inspired by Adam Blackett, owner of The Farm Café here at Chigborough Fisheries. Certainly, us locals are lucky to have Adam on our doorstep, a chef whose creativity is rooted in classic French cuisine. No surprise when you reflect on some of his career highlights.

Appointed by the late great Albert Roux, to say Adam learnt from one of the very best in the profession is, if anything, under-egging the pudding.

Previously, Adam was senior sous at The Mason’s Arms, the Michelin-starred Devon pub and fine dining restaurant run by chef patron Mark Dodson. Again, who better to work alongside in the kitchen.

And it was Mark who recommended Adam to Albert, an astounding peer-to-super peer endorsement to say the least. We could go on, but you probably get the picture.

So, without further ado, head to our Recipes page located via the homepage and get cooking.