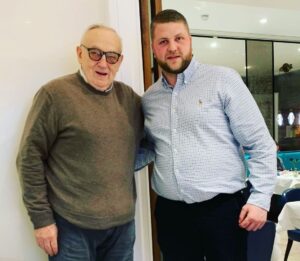 It’s not often you sit down with a giant of French cuisine, so it was a real honour to have lunch with Pierre Koffmann recently. The legendary French chef shared a table at Sotheby’s Restaurant with L&J master smoker Sean Jackson to exchange stories and impart a few pearls of culinary wisdom along the way.

Originally from Gascony, Koffmann came to the UK back in the 1970s where he first joined the famous Roux brothers at Le Gavroche before becoming their head chef at The Waterside Inn in Bray.

In 1977, Koffmann set up his own restaurant La Tante Claire in Chelsea eventually gaining three Michelin stars.  Over the years some of Britain’s finest and most successful chefs worked under him including Marco Pierre White, Gordon Ramsay and Tom Aikens.

A big thank you to Sotheby’s Restaurant head chef Myles Fensom who dazzled with an array of delicious dishes sprinkled, as you’d expect, with some L&J smoked favourites.